When I met Ciro, I was at a point in my life where freedom, happiness, and exuberance were peaking on a daily basis. I had been flying solo for a solid 7 months, and in that time had accomplished a major dream of touring. After travelling for a month in the states, which was magical in every sense, I felt practically superhuman. The world was at my finger tips.

One year later, I was debilitated with crippling anxiety, and crying multiple times a day from an overwhelming sadness for which I could not find a reason. I wasn’t suicidal, but I didn’t want to live. WHAT HAPPENED!?

I have tried to answer this question for myself so many times, and always end up lost in the abyss. Depression can be such a sneaky creature, creeping up in every dark corner without notice until one day it’s just everywhere.

In retrospect, I can identify some key moments that may reveal how the path led me from super happy to clinically depressed.

In January 2013, I wrote my last song. Winter. An ode to the cold that so many of us feel on a physical, mental and emotional level when the temperatures drop, the holidays are impending, and the darker days set in. It is my favourite song to date, and God I hope I write another one again one day.

But it was somewhere around this time that something broke in me. The story I’m about to share may not seem very significant at all, however the coincidence of this occurring at the same time that songwriting was lost of me may be of important evidence. It was something about the timing, the trigger, the angle it hit me, the tone, the shock…the combination of so many factors, that somehow cut a wire in my system. And over time, the  system continued to malfunction, until I reached a crisis point, and succumbed to the help of anti depressants, which 2 years later I am still on. But today is another chapter. THIS chapter is about then:

Ok, so I had this friend. We were both part of a large community of people who attended support groups in the city. In 2011 my parter and I at the time set up a group specifically friendly to the LGBTQ members. This friend was so grateful for the start up of the group, and immediately became a regular attendee. She was a transgender woman, aboriginal, was very tall, had a very deep voice, had an intimidating energy, yet was kind, welcoming, and very passionate about our group. I always admired her for having faced so much incredible adversity in her life and yet committed to a path of healing, support, and fellowship. Despite being slightly intimidated, I always looked up to her and felt really proud to walk the path of recovery with her. Our group was really special and was a safe space for people who had a hard time finding a place to fit in. Over the years, this friend and I gathered weekly, did volunteer work together, and even travelled together. After years of working together in a community of brother and sisterhood, I was convinced that her first few jabs were nothing to do with me.

In late winter 2012 these jabs began. At one of our weekly meetings, it was my turn to share in a circle. I was about mid-way through my share, and she said “Thanks Kendall”. This was the traditional way to respond to someone who was finished speaking. Everyone went along with it and so did I, as I was completely caught off guard. It’s possible that it was an honest mistake. But in retrospect, it clearly wasn’t.

In another instance, I sent a group text message inviting her and sone others to my birthday. She coldly requested to be removed from the conversation. 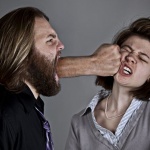 At this point I confided in a friend or two about her recent behaviour. All were sure it had nothing to do with me, and that she was struggling in her own life. This confirmed my suspicions that I was not in harms way of someone’s subtle attacks, but just happened to witness an individual coming out sideways with their own internal pain. I felt compassion for her and send out a few prayers for whatever she was going through.

Finally, it was the night of my birthday. (not the party, just the day of birth). Another uncomfortable moment occurred within the meeting that seemed to be directed at me. While she was sharing, she said something relatable and heartfelt. A few of us responded with a laugh, feeling connected to the struggle she was talking about. In a serious, angry tone, she suddenly shot an, “it’s not funny” in my direction.

Everybody tensed up. Like I said, she does have an intimidating personality, but it was also uncomfortable and embarrassing to be called out, misunderstood in front of the whole group.

When the meeting was over, I was standing outside chatting with some people, feeling a little shaken by the presence of my friend who was clearly having issues with me. She approached me and asked to speak to me privately. I immediately felt nervous, but also relieved to find out what was really going on.

She started by saying she wanted to apologize for keeping me at a distance and that she had a resentment against me (always a heart sinking thing to hear from a friend). Yet she wanted to maintain the distance, and just be friends on “the outside”. Her words were emotionless and that harsh  air of hers caused my heart to race but my anger kept me like a stone. I didn’t understand what she was talking about, especially why she would have a resentment….towards me!

Me who had always been so kind and inclusive to her. Me, who had been working so hard to not take her words to heart and have compassion for what I heard was storming in her heart. This didn’t make any sense. I pushed for an explanation. She resisted, saying it wasn’t important. I admitted, I was very confused and felt frustrated because I wanted to make it right, but couldn’t do so if she wasn’t going to tell me what the problem was. The whole situation wasn’t making sense to me. So Finally, with an energy shift to hostility, she agreed to let me in on her secret. “Alright, you really want to know? I think you’re really egotistical. And I don’t wanna be around that.”

The words written here in print don’t look like much. Just a collection of letters. But in the moment it happened, in the way she said it, with such repulsion for me, and the way it hit my ears, with no one around but her and I, my heart shattered. It just feels so sad to have someone look at me that way. Being an adult doesn’t make a comment like that bounce off. In many ways, I felt like a 10 year old kid, spirit crushed by the bully; their words suddenly piercing through a decade of your parents’ love and affection.

In my head, I thought, “How could you say something like that?” I was certainly no ego maniac. I was a loving, kind hearted member of the group who always shared my most honest feelings and loved that group. It was completely unprecedented, which is why it pissed me off so much.

“So you don’t have a resentment, you just have a opinion about me,” I said. I felt so angry.  I turned around to walk away and as I approached my car I could feel my anger turn quickly into a lump in my throat and my eyes started burning. I felt my heart breaking. Dammit!!

Someone I didn’t know very well was waiting for me in the car so I could drive them home. I breathed deeply and started crying quietly, wiping tears away while striking up conversation to try and conceal what was happening to me. I convinced myself she couldn’t tell, but she told me a few weeks later that she could. When she got out of the car, the floodgates were released.

Like I mentioned before, it was my birthday, so I had a few friends waiting at home for me with a cake. After I explained why I was in such a state, the flood of “don’t take it personally” type comments flooded in. I knew it. I knew it wasn’t and that there wasn’t anything wrong with me; that she was the one with things wrong and they were just being projected out. But all that knowledge, though helpful for my brain, was useless in my heart. I was hurt. It. Really. Hurt. And…it just kept hurting.

One thought on “Chapter 3; Punch in the Face”