Everyone met at our house by 11:30am on Tuesday Morning. Paul, our new bass player, has a van, which he has kindly donated to travelling Betty trips during his stay with us. We hope it is a long stay. We’ve had quite the changeover of bass players in our time. Paul brings more to the band than just good skills and a van, however, but we’ll get more into that later. The band is now busting at 5 members plus our manager/merch man, Ciro. 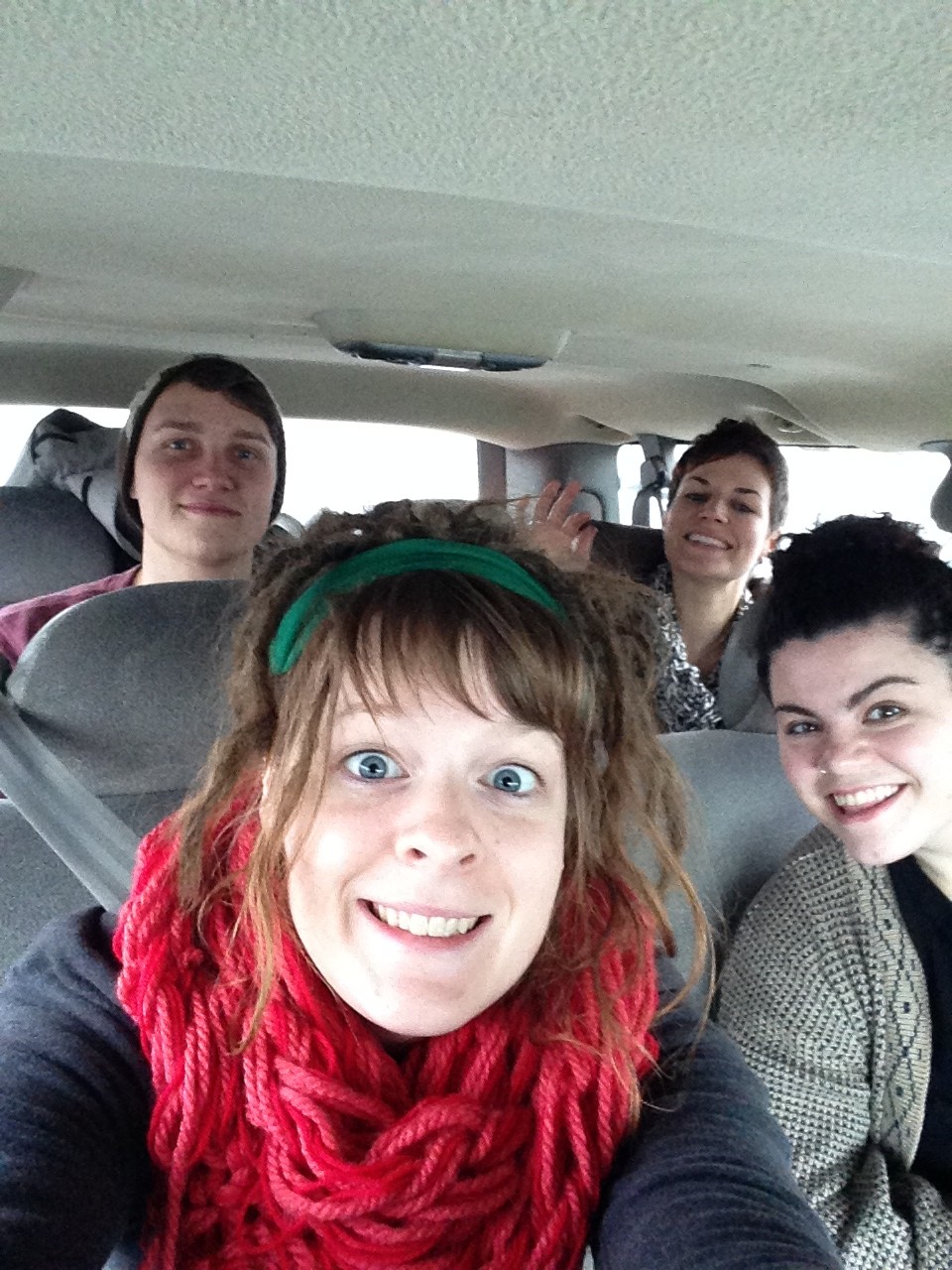 We tooted down to the ferry terminal and were quite on time. Ciro (also Kendall’s mate) got a little too excited and began pushing my buttons, thinking he was being funny. I was a little sensitive, heeding the pressure from our impending industry gig, and did not take it well. Ciro was in trouble for most of the boat ride. Luckily my dad was also on the ferry so Ciro had someone to sympathize and sit with.

Paul had mentioned recently that he had a special know-how when it came to changing strings, so he was awarded the task of putting a brand new set of Elixer’s on my guitar. Lena challenged the event by saying “won’t new strings make it sound too bright?”. Paul immediately myth busted her with confidence. “Not if you do it right”. Lena and I have agreed that for many reasons we feel Paul is the rock of the group. We feel safe. Perhaps he will be called “Papa Betty”. Now that I think about it, Caleb is clearly “Baby Betty”. This might be something to build on. 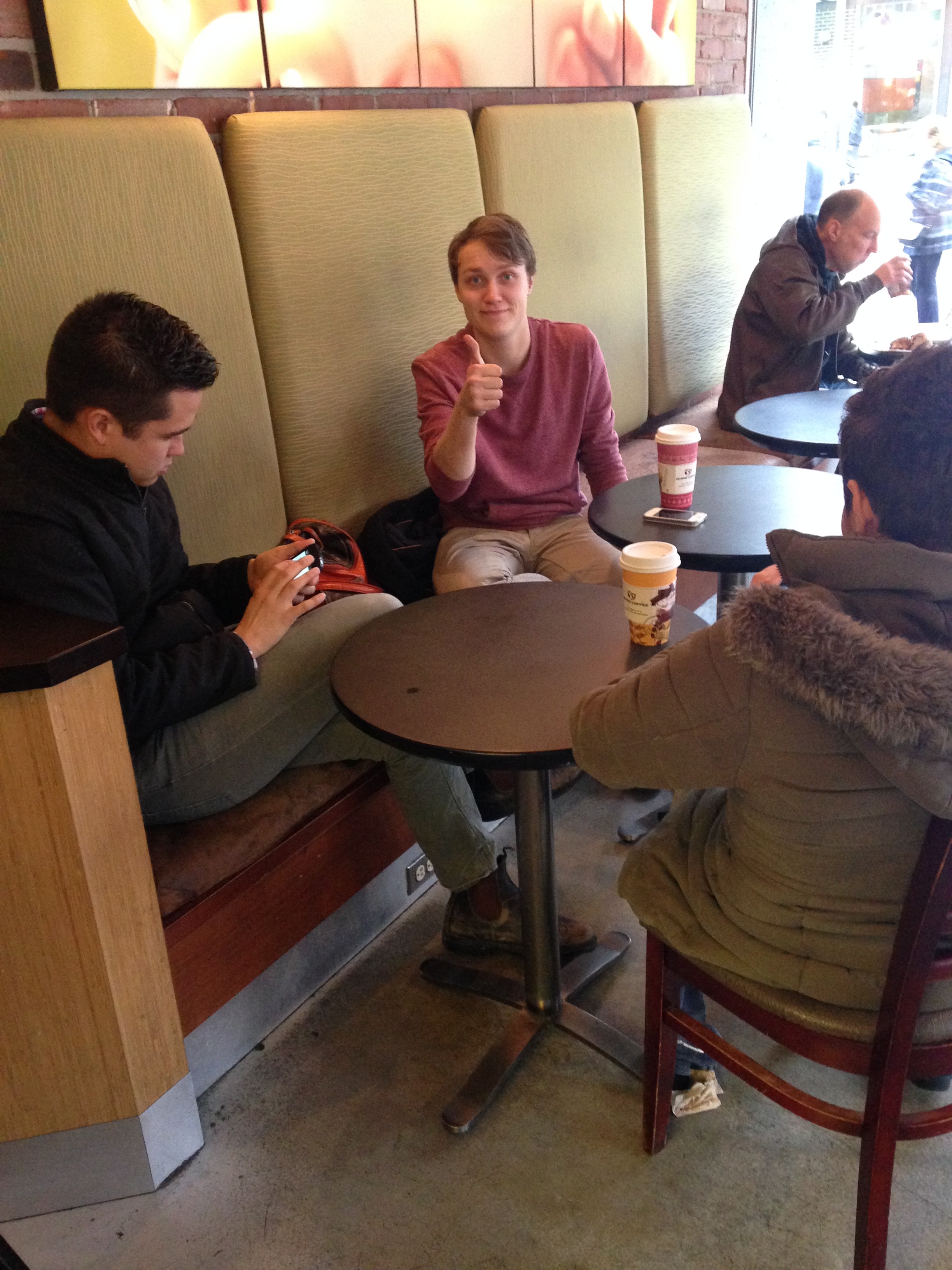 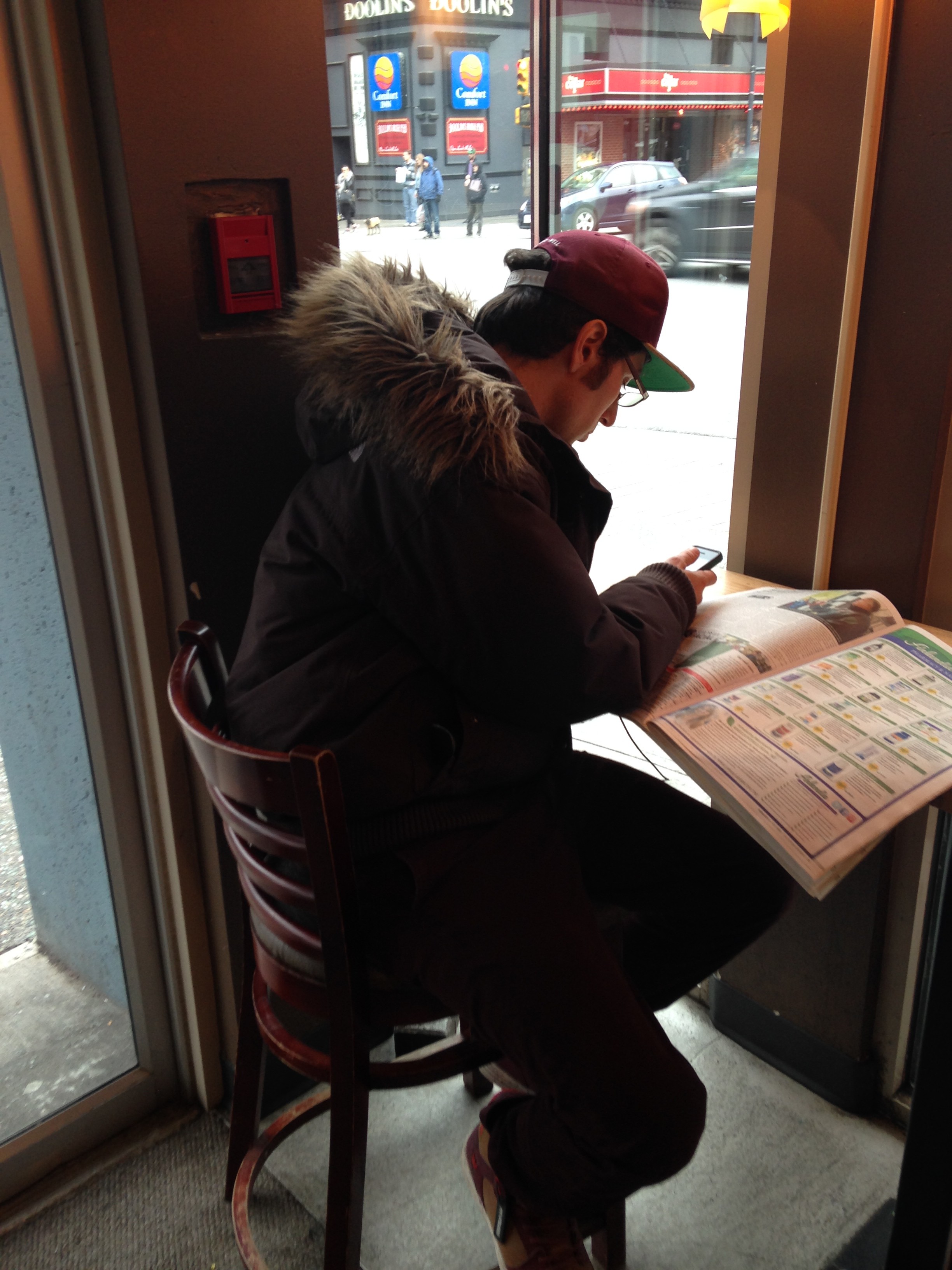 Upon arrival in the big city, we parked behind the Roxy and ventured to a nearby Blenz. Ciro sat by himself in a corner. Amelia wandered off to find hairspray. Paul eventually disappeared to the local Long & McQuade. I don’t remember what happened to Lena and Caleb. I had a nap. 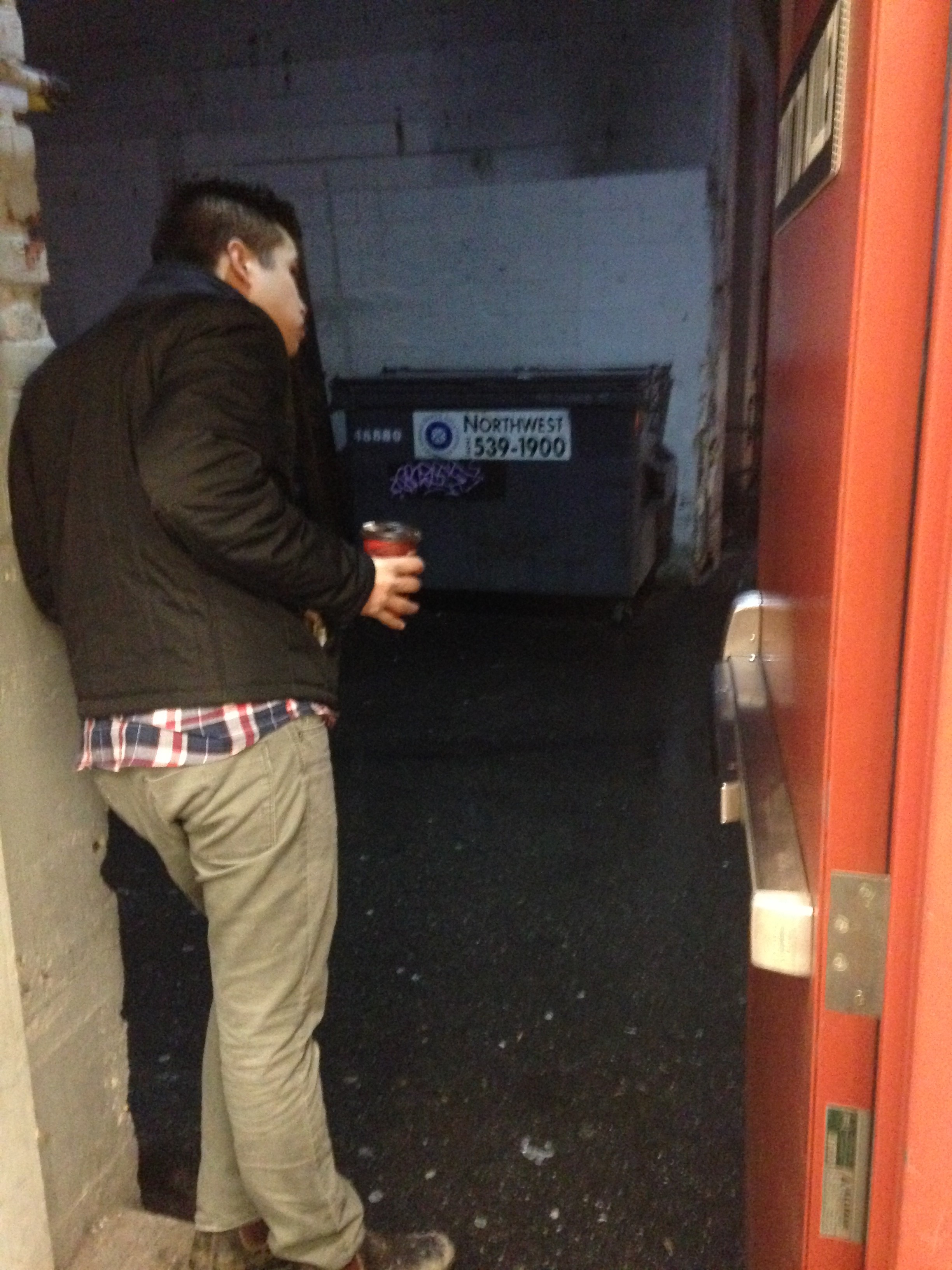 Load in time quickly approached. We reunited and began bringing our equipment into the venue. My parents also had a load and took their sweet time arriving at the door. Paul and I took turns waiting.

Eventually we all settled in. Lena, Amelia, and I got dressed up in the bathroom to our red and black Betty code, and did the usual vocal warm up routine.

Sound check was pleasant. Everyone had their own monitor. The soundman was easy going. We could all hear ourselves. This combination of things is actually amazing. Trust me. 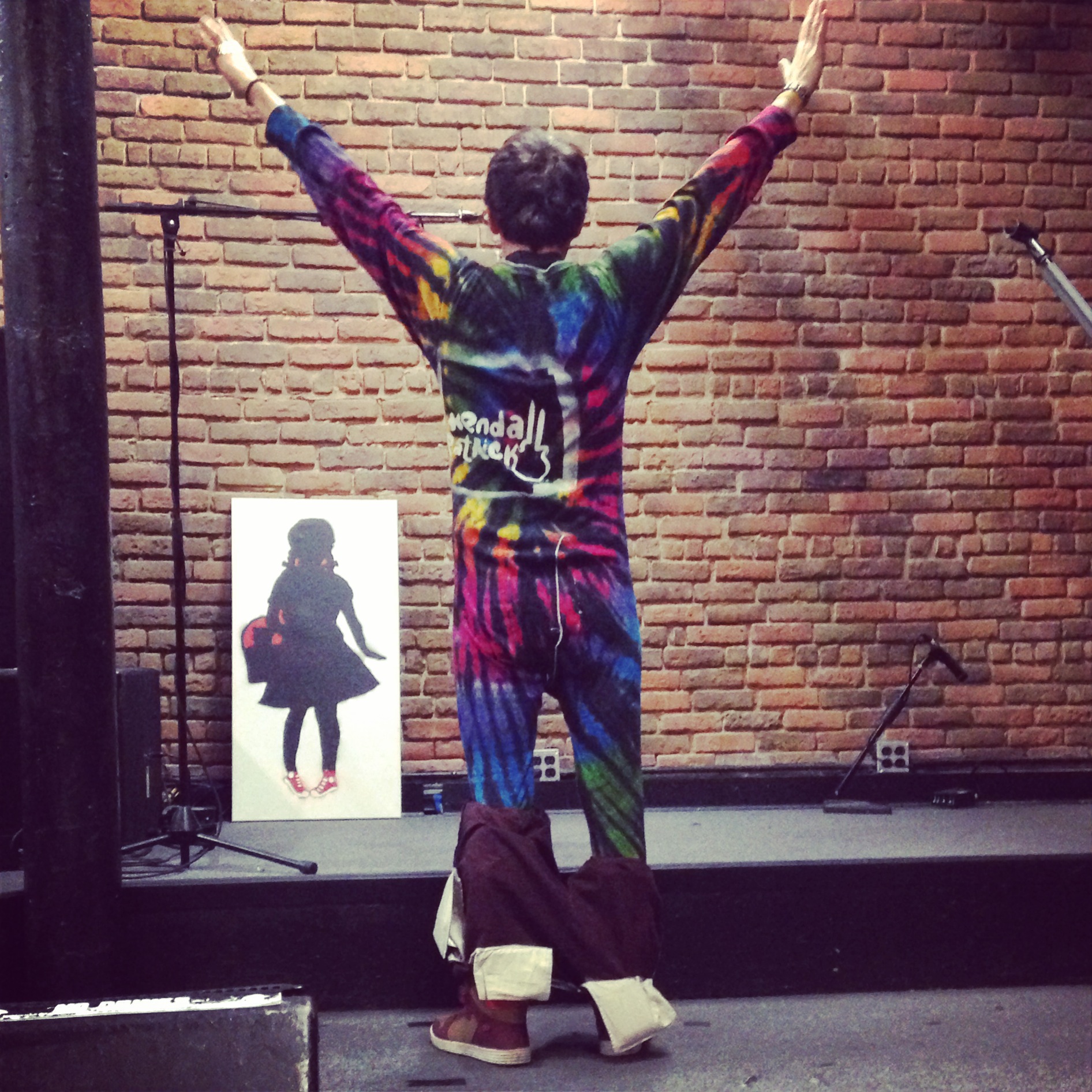 I believe the show itself went off without a hitch. My dad said it was the best one he’s ever seen. Ciro stripped down to his tye die Kendall Patrick onesie on stage.

Ciro had a beautiful merch table set up, equipped with lights and everything. Didn’t sell anything though. I’ve yet to learn the science of selling merch. Some days it’s lots, some days nothing.

The promoter, Clyde, really liked us. He gave us a special tour of another club he books across the street called “Joe’s Apartment”. Shortly after we got home we set up a gig there for April. BAM.

After all the schmoozing was over, we stopped at Denny’s. Actually we stopped really far away from Denny’s, and then walked the distance in the rain. I TOLD Paul to visualize a spot right outside. He didn’t listen. This is one area he needs to work on. 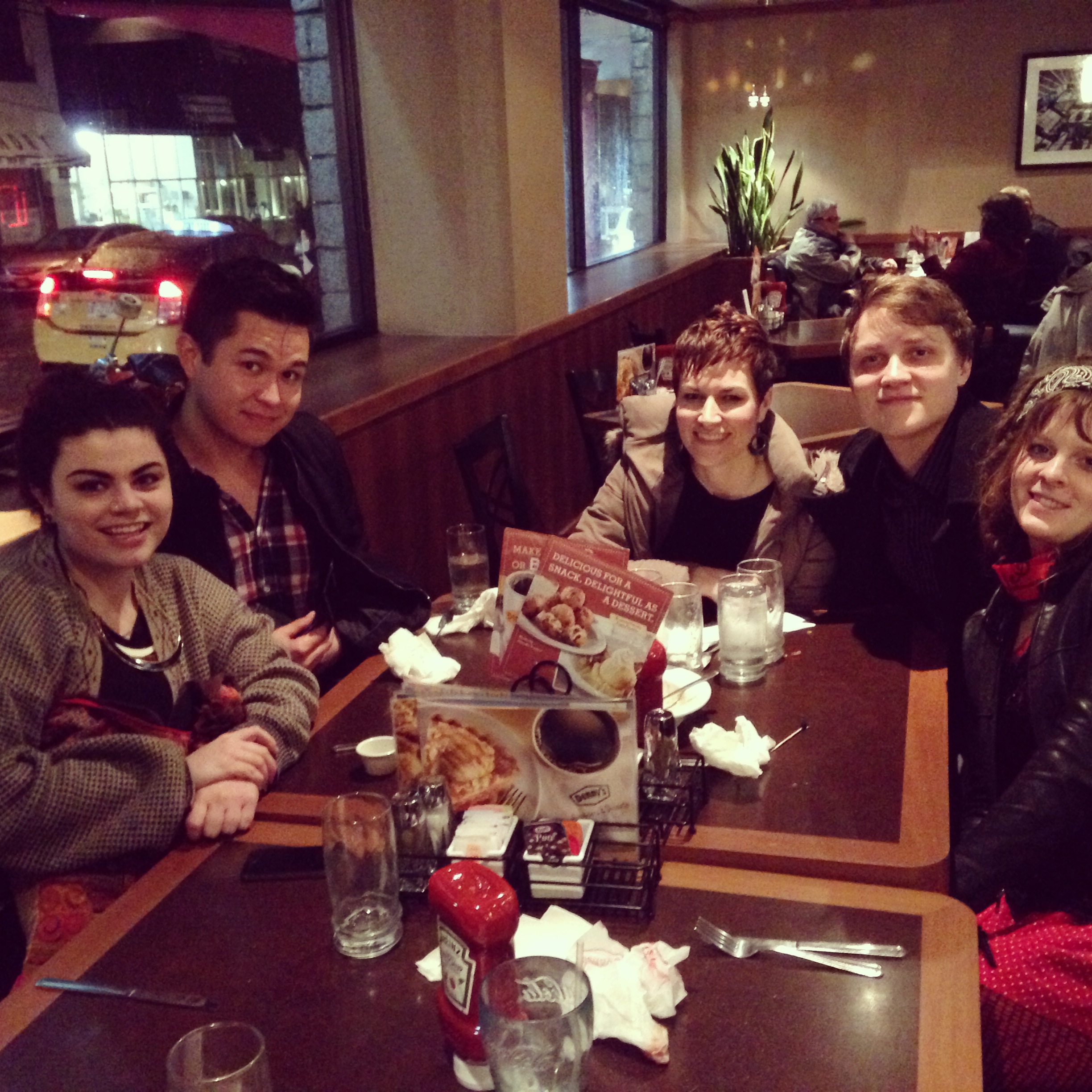 Denny’s was nice. I was finally more relaxed. Time to just eat and enjoy my beloved Bettys. I do really love them. More than words could ever describe.

It was about 12:30am when Paul very humbly walked to the van and drove to pick us up. We piled in and made about an hour’s journey to my Uncle Terry’s house. Paul decided to sleep in the van. Loser. The rest of walked in very quietly to find multiple air mattresses side by side just waiting for us to enjoy a deep and peaceful 2 hour sleep. Oh, there was also a cooler with drinks and bags of chips. Uncle Terry, you rock. We left a thank you card and one of Ciro’s hand made vases. At 4am we were gone.

I don’t remember much after that. I think I tried to stay awake at least on the drive to the ferry out of respect for our driver, but sleep quickly ensued and lasted until we were dropped off. Apparently Amelia also stayed in the van to sleep, while the rest went up to the passenger deck. I heard that Paul and CIro sat next to each other in silence for most of the 2 hours, while Lena passed out near a bathroom somewhere. As for Caleb, his big moment came after drop off. He texted me later that day to inform me that minutes after leaving my house, he slid on black ice and totalled his car and the one he hit. Luckily no one was injured. The whole reason we came home so early was so that Caleb could get to school. Needless to say, this did not end up happening afterall. I made it to work for my usual 10am start time and had a surprisingly good day.

Very happy to report that our next Vancouver showcase takes place on a weekend. Rock stars need their sleep.