Let me start by saying … I forgot my pajamas.

Also, the shifty internet at my hotel last night wouldn’t let me make this important edit to the previous post:  In the airport waiting gate full of approximately 30 people, everyone was quietly sitting. Everyone except the lady who was having a conversation on speaker phone…on SPEAKER PHONE..at top volume. This was at least a 15 minute performance, and all I could think of was George Costanza

I immediately relayed the experience to my favourite local comedian to share the amusement. It was urgent enough to use the last of my phone battery power. Clearly I didn’t think ahead because when we landed, I realized I had no idea what hotel I was supposed to be cabbing to, and all the information was on my dead phone. Kindly, the lady next to me on the plane, let’s call her…”Teryaki Rice Noodle” (Seinfeld fans will get the reference), lent me her charger at baggage pick up. People rock.

So, today was amazing. My fear was that I was going to show up to this thing and get social anxiety, and sit like a loser all by myself looking awkward. To my delight, this did not occur. Quite the opposite in fact.

The day began at 11am with Regina’s own Nick Faye playing some acoustic songs, mixed in with some opening speeches. I’m a bit of a social media junkie so of course I took a video and posted it to my instagram account, with the appropriate tags and hashtags. #iLoveHashtags #MyFriendFionaAlwaysHasTheBestHashTags #SheHashTagInspiresMe

This turned out to be an alternative way to say hello to Nick. When he walked by later that day I waved at him and he immediately recognized me as the girl who posted the video, so I didn’t have to come into the conversation cold. #MakingFriendsViaSocialMedia It was perfect because we got to talking and I picked his brain about venues in Regina for my tour in May. And he knows Northcoat, who Amelia and I opened for when they came through Nanaimo. Amelia knows Northcoat through the people who’s kids she taught piano to, who I now teach piano to. Connections. Bing Bing Bing Ah, the synchronicity … The moral of the story is, I have a new acquaintance. Nick from Regina. #yay

The next part of the day consisted of panels and mentor sessions. Mentor sessions were super cool. It was like speed dating. Industry delegates from across the globe sat at tables in lines and rows, and the rest of us moved around from table to table in 15 minute intervals, getting a chance to spend some one on one time with each of them. If you’re interested in who I talked to, just check out my twitter feed on the right-hand-side panel of this page. 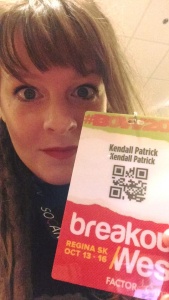 What I realized from having discussion after discussion, is that I’m doing everything right. There are no big gaps that I need to fill thanks to all the work I did with Bob this summer. I just need to keep on this trajectory. I’ve been blessed with a rockin’ team, and I’m meeting the opportunities with hard work and dedication. I’ve got my next year mapped out. The public release of Peaks and Valleys is set for February 2017, I’m touring Ontario and Quebec in April, and Western Canada in May. We’ll see how many festivals I can get into, and I think it’s also time to head back down the west coast of the states and follow up on that epic adventure Alex and I had back in 2012. Remember The Tour Vlogs!? #imStoked #careerGameOnPoint

The day concluded with (for people prone to social anxiety prepare to cringe) the mixer. Yes, an unstructured free-for-all where you just go up to people at random and begin conversations. To my great delight, I didn’t even have time to silently pep-talk myself up to it. I was standing in the line up for snacks and just slid into such a kick ass schmooze-fest with my new friends Arlo and Oozee. These guys knew my soul. That hour went by so fast, and when it was over, I wasn’t ready to leave.

I wasn’t going to go to the music festival part, but I found out it’s only 20 dollars for a wristband and now I have bands to see and dancing to do. So tomorrow, I shake my groove thang. Tonight, I cry my eyes out with my relatives Barry and Sharon while we watch America’s Got Talent and eat chocolate ice cream.

I’m wishing my new friends the best of luck at the Western Canadian Music Awards tonight!!